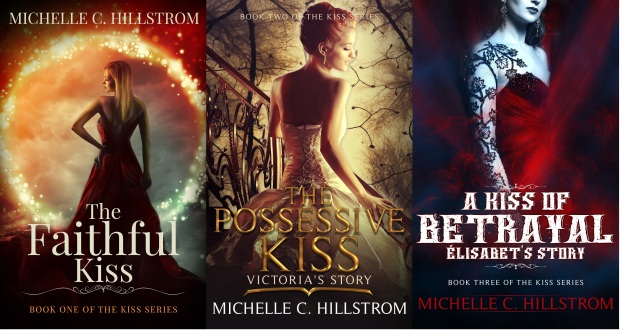 The Kiss Series is a New Adult Paranormal Romance Series written by indie author Michelle C. Hillstrom. This series chronicles an undying love affair as it spans centuries, defeats death, and conquers those who would dare to try to rip it apart.

“The Faithful Kiss” is the first book of The Kiss Series. In “The Faithful Kiss,” we meet Katelynn Wilder, a college freshman who is haunted by her past in more ways than one. All Katelynn wants to do is escape the life she left back in Texas and fit in with her new sorority sisters. But Wesley, an older fraternity brother, has different plans for her – plans that he has been concocting for a very long time.

HOW WELL DO YOU KNOW THE FAITHFUL KISS? TAKE THE QUIZ TO FIND OUT!

“The Possessive Kiss: Victoria’s Story” is the second book in The Kiss Series. With this book we go back in time to antebellum Louisiana to where this love story began. Victoria is the heiress of a wealthy planter and has her whole life planned out. But when her beau chooses to marry someone else, a new stranger arrives in town, and the whole country is on the verge of a Civil War, she turns to a voodoo priestess for guidance. The choices she makes will alter her life and the lives of every woman in her family that comes after her.

“A Kiss of Betrayal: Élisabet’s Story” What makes a villain?
Élisabet Babineaux never saw herself as a villain. She was the protagonist of her life, just as we all are. Born a Princess, her whole life was planned and laid out before her. She knew where her life was headed and what was expected. That all changed the night she met Juan sin Miedo.
Betrayed by her own family, Élisabet’s life course is sent spiraling as she tries to learn to control her new appetite, her grief, and new powers.
The betrayal dealt out by Élisabet’s family will have lasting and devastating effects as she spends her immortal life attempting to replace that which was taken from her.
A twist of fate, a little magic, love, and a lot of loss and betrayal sends Élisabet on an adventure she never could have foreseen. Her story spans more than five centuries and multiple continents.
Every story has two sides. We have heard Katelynn’s and Victoria’s versions. Now it is time to learn Élisabet’s side of the story and understand what drove her to become a villain.

WATCH THE “A KISS OF BETRAYAL” BOOK TRAILER

There is more to Polly of Mossy Oak Manor than what meets the eye. It is true that she is a timid house slave for the De’Muerre family, but she is secretly powerful.

As a house slave, she is often invisible which has allowed her to collect secrets. Secrets that can be yielded to help others, or to help herself. Secrets like how to help runaway slaves.

But one of these secrets binds her eternally to her mistress, Victoria De’Muerre.

Because of this secret, her and all of her descendants will battle against the Demon of Death to right a wrong and save a life.

“The Original Kiss of Sin” – PREQUEL

You can purchase books from The Kiss Series here!